I took a closer look at scan-NG and at the scan.bro that shipped with 1.5 to understand how the detection could be better than what we have now. 1.5 wasn’t fundamentally better, but compared to what we are doing now it has an unfair advantage

Not only is it using a default timeout of 15 minutes vs 5 minutes, it is using read_expire. This means that an attacker can send one packet every 14 minutes 25 times and still be tracked.

Meaning scan.bro as shipped with 1.5 can pick up slow scans over as much as a 6 hour period.

The sumstats based scan.bro can only detect scans that fit in the fixed time window (it is effectively using create_expire, but as Aashish points out, limited even further since the ‘creation time’ is a fixed interval regardless of when the attacker is first seen)

The tracking that 1.5 scan.bro has isn’t doing anything inherently better than what we have now, it’s just doing it over a much longer period of time. The actual detection it uses has the same limitations the current sumstats based scan.bro has: it does not detect fully randomized port scans. It would benefit from the same “unification” changes.

Since that fixing sumstats and adding new functionality to solve this problem in a generic way is a huge undertaking, I tried instead to just have scan.bro do everything itself. We may not be able to easily fix sumstats, but I think we can easily fix scan.bro by making it not use sumstats.

To see if this was even viable or a waste of time I wrote the script: it works. It sends new scan attempts to the manager and stores them in a similar ‘&read_expire = 15 mins’ table. This should detect everything that the 1.5 based version did, plus all the fully random scans that were previously missed. And with the simpler unified data structure and capped set sizes it will use almost zero resources.

Attached is the code I just threw on our dev cluster. It’s the implementation of “What is the absolute simplest thing that could possibly work”. It uses 1 event and 2 tables, one for the workers and one for the manager.

What does this look like from a CPU standpoint? 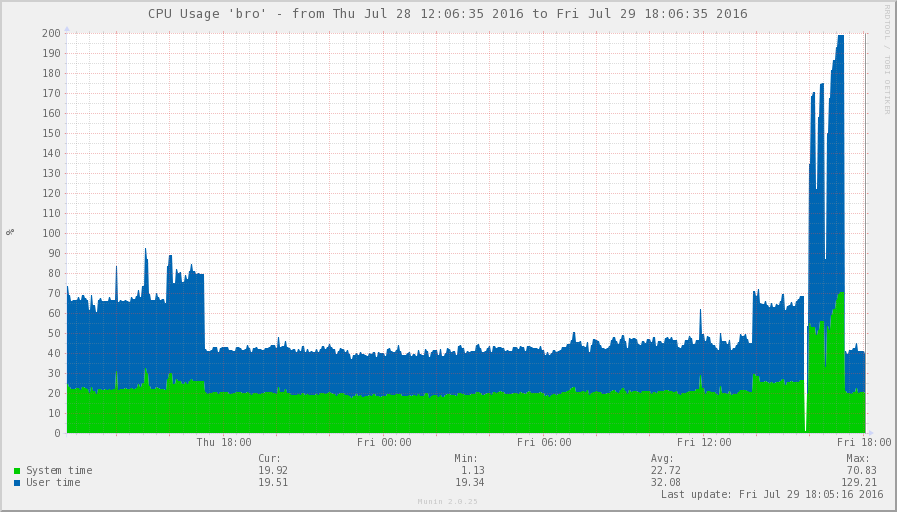 This graph shows a number of experiments.

The ‘duration’ is TODO in the notices, but otherwise everything works. I want to just get the start time directly from the time information in the table… I’m not sure if bro exposes it or even stores it in a usable way. If there’s no way to get it out of the table I just need to track when an attacker is first seen separately, but that is easy enough to do.

I know… I send too many emails

I let the rewritten script run over the weekend, cpu and memory was stable.

I added one additional table to store known scanners so it can completely purge a scanners state, this cut down on the total amount of data stored by 1/2, as measured by

I also fixed the duration and port formatting issues, so now it properly shows things like

I also even further simplified the connection filtering that feeds into scan detecting, I think it now finally has the bare minimum needed to detect scans and does not flag connections with capture loss as scans.

The last graph I included was a bit of a mess, this one is a little more clear 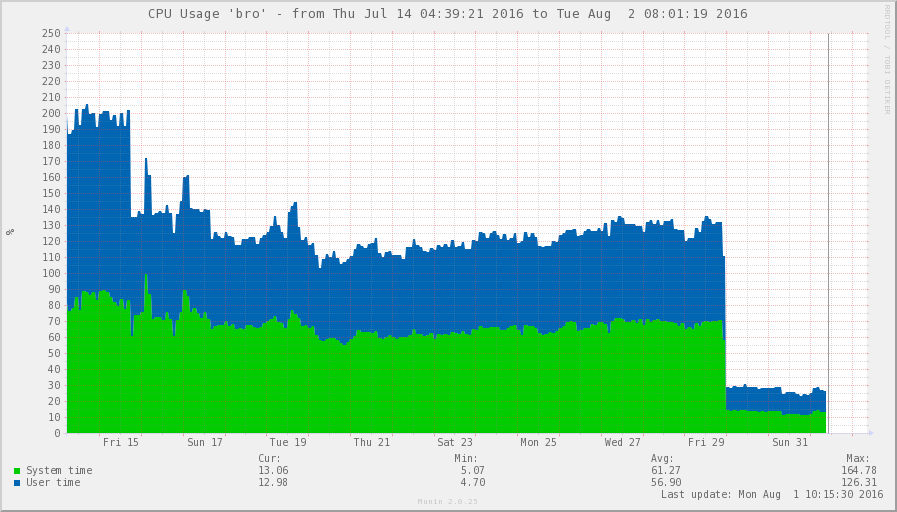 It shows 3 experiments, from left to right:

Also interesting is a graph of the network traffic during the same timeframe: 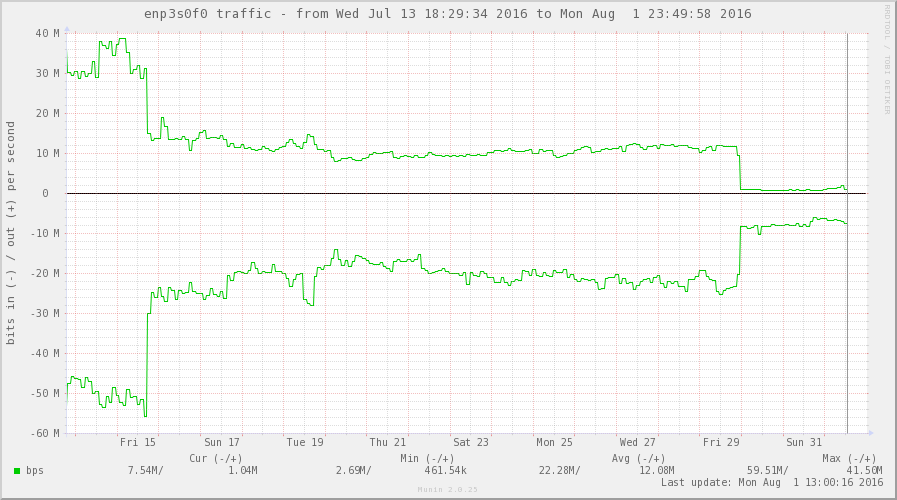 The negative line includes log writes, so the floor there won’t be zero.

I realized one of the bigger issues in the sumstats based code is not really the detection of scans, but what happens AFTER the detection. After detection it keeps accumulating data, or possibly only slightly better, keeps trying to accumulate data.

However, sumstats has no idea that the only reason it is collecting observations is to raise a notice that could be currently suppressed for an entire day.

The observations don't stop once attacker has already triggered a notice. The whole machine keeps running even though nothing visible will ever come out of it.

I managed to fix this in the sumstats based unified scan.bro, but it is only a partial fix.

The code that does this is in this version:

and then later, the checks are aborted early with:

if ( scanner in known_scanners )
return;

This works, but the reason it is incomplete is that if the notice was triggered by an intermediate update, sumstats still contains data for this attacker. This data will be sent over to the manager at the end of the epoch, even though by that time it isn't needed anymore since there was only one threshold and it was already crossed. The fix for that would be some more changes inside of sumstats..

my non-sumstats based scan.bro and AAshish's scan-NG both handle 'known scanner' suppression directly with a cluster event. Because there's no middleman (sumstats) it ends up being a bit simpler.

This Notice::begin_suppression trick itself is nice though, since it lets you configure suppression intervals in one place, instead of potentially having to configure policy specific suppression and keep them in sync.